Use of motor fuels in transport

Vision for transport sector development up to 2030

A sustainable integrated multimodal transport system that meets society's economic, social and environmental needs and contributes to the full integration of the Slovak Republic into the European Economic Area.

Reduced negative environmental and negative socioeconomic impacts of transport (including climate change) due to environmental monitoring, effective infrastructure planning/implementation and a reduced number of conventionally fuelled vehicles, and use of alternative fuels.

Is the usage of motor fuels in transport decreasing?

Proportion of fuel types in road transport in 2017 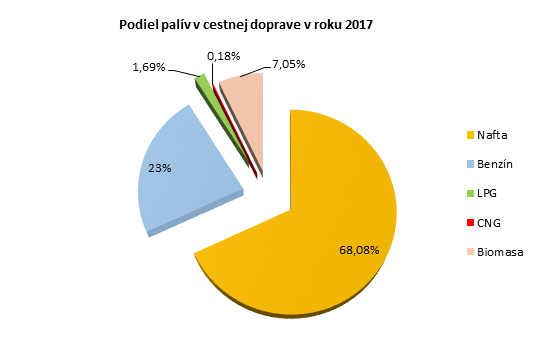 Petrol and diesel and to considerable amount compressed natural gas and liquefied petroleum gas are among the most widespread motor fuels.

Unleaded petrol is used predominantly in spark ignition engines for road motor vehicles which are equipped with a catalytic converter and controlled by a lambda-probe. The following types of petrol, differing in octane numbers, are available on the market NATURAL 91 – NORMAL, NATURAL 95 – SUPER, NATURAL 98 SUPER PLUS.

Diesel fuel is used as a fuel for internal combustion diesel engines. Depending on the season, diesel fuel is divided in accordance with the STN EN 590 requirement as transitional summer and winter.


Motor fuels liquefied petroleum gas - from a short - and mid-term perspective, liquefied propane-butane (LPG) and compressed natural gas (CNG) are a cheaper and more environmentally-friendly alternative to petrol and diesel. However it should be emphasized that these are fossil fuels, whose production is closely linked to the extraction and processing of oil, originating in non-renewable energy sources.


Source: TRI, Inc. Source table
In the assessed period, CNG consumption had a significant increase until 2013. After this year there were only year-on-year declines. CNG consumption in 2016 increased by 54, 7% compared to 2005.


Liquefied natural gas (LNG) - produced from natural gas in a liquefaction process, during which the gas is extremely supercooled - can be used as another substitute fuel. Its advantage is its liquid state and hence also easier transport. Up to 3.5 times more fuel can be obtained when converted to its gaseous state, which in practice also means a longer range (when compared to CNG). LNG as a fuel is competing with CNG by offering a longer range and a cleaner fuel. Its disadvantages are the lack of refuelling stations (there is only one testing station in Slovakia), more complicated production technology, storage (need for special tanks and very low temperature). In case of its heating, fuel evaporation must be ensured in case of a longer outage. Despite these disadvantages, LNG is becoming increasingly popular in Europe. LNG is mainly fuelling buses, vans and smaller trucks.

Biofuels are one of the most discussed topics in the field of motor fuels. Given the many positive impacts of their use, their development is in the interest of all developed nations of the world. The promotion of their production and utilization is already enshrined in the legislation of the EU.
The obligation to introduce biofuels to the domestic market in 2017 was laid down in Section 14a (1). 1, par. 1 (g) of the Renewable Energy Sources Act, as amended for the reference period (hereinafter referred to as the "RES Act"). The benchmark value was 5.8%, while the minimum content of biofuels in individuals types of fuels was laid down in Annex no. 1 of the RES Act. This lead to an obligation for the businesses concerned to introduce such fuels on the market, which corresponded to the benchmark value, calculated as the total energy content of the overall amount of motor fuels related to its business activities for 2017. The RES Act sets precise benchmarks up until 2020.

The actual fulfilment of the 2017 benchmark value is expressed as 5.99% of the energy content of the total amount of petrol and diesel.

First-generation biofuels, as a low-percentage blends of biofuels with hydrocarbon fuels, were used on the Slovak market and distributed via existing infrastructure (distribution system and points of sale).

LPG (liquefied petroleum gas) - obtained in the extraction of natural gas and oil or as a by-product in the processing oil in refineries. It is generally a liquefied propane-butane blend and is used as a fuel.

CNG (compressed natural gas) – obtained by the compression of natural gas to a pressure of 20-22 and used as an alternative fuel for internal combustion engines. It can be considered an ecological fuel, due to the high content of hydrogen in methane, causing a low proportion of COA per unit of energy released.

Diesel fuel - is a liquid fuel consisting of a blend of hydrocarbons which are slow to evaporate and other additives. The general number of carbon atoms in each of the hydrocarbon molecules forming the basis of the mixture is between 9 and 22. Diesel is used as fuel for compression ignition engines. It is usually produced by hydrogenating fractions from oil distillation.

Petrol is a liquid blend of volatile hydrocarbons (mainly alkanes, cycloalkanes, aromatic hydrocarbons and alkenes) separated from oil and other additives (most commonly benzene and isooctane) which improve its fuel properties. The general number of carbon atoms in individual molecules forming the basis of the blend is between 5 and 12. Petrol is used as a fuel for the majority of spark ignition engines. It is most often produced by the fractional distillation of oil.

The basic information for the overall balance of fuel consumption, as well as the determination of fuel consumption in road transport are data on production, import, distribution and sales of petrol and diesel provided by fuel producers - Slovnaft Inc. Bratislava, the Customs Directorate of the Slovak Republic. Preliminary data is provided by the Statistical Office of the Slovak Republic.
Data on the distribution of gaseous fuels - LPG is provided by the exclusive distributors of LPG filling stations network and the information of CNG is provided at fillings stations and competent employees of the SPP, Inc., and SAD, who operate these stations. These are used as real data and are also used as an input to calculate emissions from road transport by the COPERT 5 program. These data are available at and processed by the Transport Research Institute, Inc., Žilina who provides them upon request.